TIme for another tag! I had told myself that I was going to go easy in October with signing up for swaps since Christmas is fast approaching and I have cards to make for the baby cousins! But, when ReneaBouquets announced they were hosting a fairy-themed tag swap, I knew I couldn’t resist. I adore fairies and I had so many ideas! Really, it was hard to narrow down what to make!

In the end, I went uber-girlie fairytale.

I started with a chipboard tag base that measures about 8 x 3.75 inches. I chose a pretty piece of paper from the Die Cuts WIth a View Once Upon a Time paper stack for my background. I glued it to both the front and back, because I like the backs of my projects to look neat. I then took the Storybook Background stamp by Echo park and randomly stamped the text onto the tag with a grey archival ink. To add just a little bit of contract, I then sprinkled on some drops of Prima Donna Purple Starburst spray by Lindy’s Stamp Gang all over the tag. To finish the background I took the Dragonflies stencil by Dusty Attic and spread some Nuvo Moonstone Glimmer paste for a sparkly effect.

I let it all dry overnight and then… Stared at it for a good while the next day, because the background was as far as I’d gotten in the planning process. Sometimes the muses are fickle creatures! But, in the end, I dug through my chipboard stash and found a pretty piece of Floral Lattice by Blue Fern. I dabbed on some white gesso and glued it down to the center right of the tag.

I wasn’t even sure of which fairies to use on the tag either. I had some pretty chipboard fairies and an adorable resin fairy that was curled up asleep, but neither was really detailed enough, so I chose a piece of scrapbook paper by 49 and Market that featured the Flower Fairies and fussy cut two of the fairies from the page.

I picked out a selection of pink and purple flowers from my stash and clustered them on top the the lattice chipboard. I felt it still needed a little something, so I added a chipboard clock from the Rossibelle ephemera pack by Prima. I tucked in one of the fairies behind the flowers and added some purple crystal droplets. 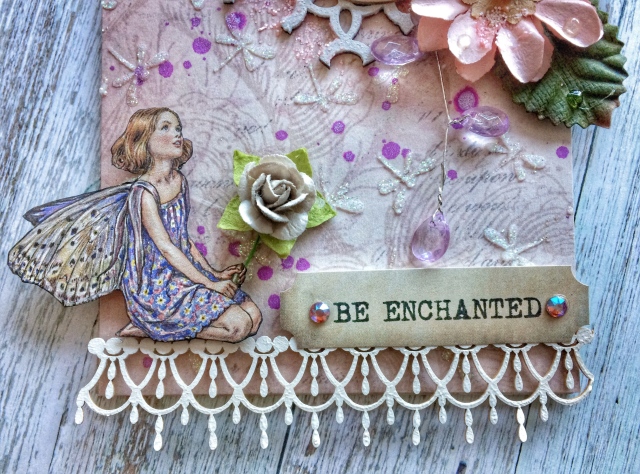 At the bottom of the tag, I took a piece of the Boheme Borders chipboard from Wycinanka, dabbed with white gesso, and glued it along the bottom edge. I attached the second fairy using foam tape, along with another flower, and added my sentiment, “Be Enchanted,” from 7 Dots Studio. I also glued on a couple of Swarovski crystals for added bling.

Because this was a ReneaBouquets swap, I wanted to add an item from Renea’s shop to the tag, so I chose one of her beautiful dragonflies to perch upon the flowers. Check out her shop to see all the beautiful butterflies, dragonflies, chipboards and other crafting goodies!

To finish, I used my clear Wink of Stella brush pen on the fairies’ wings and glued on two more Swarovski crystals to the wings of the upper fairy. I then sprinkled on some Spun Sugar Distress Glitter to the flower petals and added a few drops of Glossy Accents to simulate dew drops.

The final touch was a piece of sheer green ribbon strung through a pretty pink bead, and a little dragonfly charm. My mom, who loves fairies, tried to claim the tag as hers when she saw it, but I had to be firm… And promise I’d make a similar one just for her!